Something old. Something new.
Upon perusing an old copy of Tracks Magazine, circa 1970, Paul had found an old advert of his from his childhood label, Hutchinson Surfboards. Upon further perusal it seemed there was an amazing semi-double ended mid length kinda board behind him in the board lineup shot. Froth ensued and we had to pump one out. A few changes were made, naturally.
Down rails in the nose, slight beak, slight concave entry through to flat under the front foot and a pretty solid double concave running out through your back foot and out the tail. Hard edge in the tail and quite a bit of edge running up till about 2 foot from the nose.
Think similar to an Evo, kinda in that it’ll surf below par conditions, but also when the waves have a bit more juice and a soft railed, rolled bottom single fin might just be a bit slippy, this thing will come into it’s own and hold it down. Feels phenomenal off the tail and the side fins certainly help with keeping it on rail and feeling responsive.

Comes standard with a 7″ flex fin and side bites. 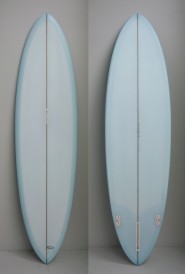